They consist of a special mixture of crushed charcoal and potato starch as bonding agents. The respective smell meanwhile, originates from secret added, like jasmine, myrrh, musk or cinnamon. Already for centuries in Crottendorf and Neudorf the incense cones is in such a way manufactured. Incense Cones are brought at the point with a lighter or matches to the glowing and set then into a Incense Smoker.

Smokers, or Rauchermannchen in German, are a unique tradition of the Erzgebirge mountains of Germany. Tradition has it that the incense they burn reminds the owner

of the incense the ‚ÄúThree Wise Men‚Äù brought to Jesus on Epiphany, January 6th. But in the meantime, smokers are now a part of the folk art of the area, with all different professions being portrayed by the wood.

The figure consists of two parts. From a small base with legs and a torso with head and arms, settable on it. The belly is however hollow. At the upper end it narrows itself into a "tube", which leads by the head to the mouth opening. If a incense cone at its top is ignited and placed into the belly of the smoker, the developing smoke pulls upward by the mouth opening after outside. For the constant far glowing, thus the oxygenation of the incense cone, provide to two holes at the lower back of the figure.

There in the mid-19th-century also in the public life the benefit of tobacco became popular, tightened the smoking male immediately its triumphant advances around the world. The models originate from the life of the people of Erzgebirge. Thus there are miners, foresters, game keepers and all other traditional occupations. In addition, the Santa Claus and Snowmans were arranged.

The nutcracker is there in the Erzgebirge since the mid-19th-century. Large numbers of items could be manufactured by the wood turners of the figures at a reasonable price. As inventor of the first turning nutcracker William Friedrich Fuechtner from Seiffen is considered. He took himself the nutcracker from that 1851 of Dr. Heinrich Hoffmann written picture book "king nutcracker and the poor Reinhold" to the model.

Already in 18th century Christmas pyramids belonged to the Christmas equipment of churches in the Erzgebirge. As model the special construction of the ‚ÄúGoepelwerk‚Äù, to a mine hoist in the mining industry, was considered which since that 15th century in the Erzgebirge in enterprise was. In the ‚ÄúGoepel‚Äù by means of horses or also water power the mined ore from the pit was produced. At the axle center of the Christmas pyramid at least one is fastened with figures equipped platform. At the upper end easily bended wings are attached. By the ascending heat of the burning candles, the pyramid comes into movement.

The miners met before Christmas to prayers and merry celebrating, the so-called ‚ÄúMettenschicht‚Äù in such a way specified in the adit. Only with miner‚Äôs lamps and candles it became light in the underground. To this occasion the mountain blacksmith Johann Teller manufactured 1726 in Johanngeorgenstadt a completely special candle stand. He forged an arc on that semi circularly candles could be attached. Inside the arc he cut a motive out. The 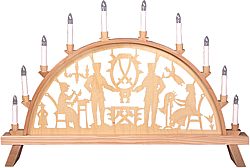 name developed only later. It comes from the word "Schwebebogen". That means a bricked arc of the two walls supports, or respectively between them "floats". The first Schwibboegen, which was exclusive made of metal, showed predominantly religious motives. At the beginning 19th century changed the shaping to pictures from the everyday life of people. The typical "Erzgebirge Schwibbogen" developed however first 1937. In this time in Schwarzenberg in the West-Erzgebirge the so-called "Feieromnd-Ausstellung" (exhibition) took place. As advertising medium one set up a 7m x 4m large Schwibbogen, which represented the history of the Erzgebirge (Ore Mountains) after a draft of Paula Jordan. Two years before in Seiffen, the "Seiffener Schwibbogen" was manufactured after a draft of Max Schanz. It represented the church of Seiffen amongst of snow-covered toymaker-houses and was manufactured contrary to those from the West-Erzgebirge, from wood. 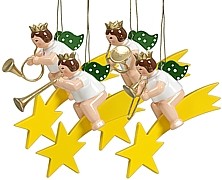 Already since beginning 15th century is decorating the Christmas tree a firm component of Christmas in Germany. First were supplemental apples, nuts and gingerbread, by sugar seaweeds, cheese and sausage, which decorated the Christmas tree. It was meant as sweetness for the children. In 19th century spread that customs of the Christmas tree decorating over far parts of Europe and also in the "new world" (North America), so that the demand for artificial decoration rose precipitously. In the Erzgebirge one specialized since then particularly figure tree ornaments.